The LEGO Minifigures: DFB – Die Mannschaft (The Team) is the second sports themed set and this time the series is focussed on the German national football (soccer) team ahead of Euro 2016. The set consists of 16 Minifigures - the team coach and 15 players. Like the previous sports set, the colour theme for the foils and leaflets is white - which helfully matches the team's home kit.

The figures are as follows:

The coach of the team is dressed in a navy blue suit. His figure comes with six pieces - a thick black mop of hair; a face which has seen the stress of several tournaments before this one; a navy blue suit body piece with unbuttoned blue shirt; a plain navy blue trouser piece with no printing; a printed 2x2 LEGO tile sharing tactics and a white LEGO baseplate. 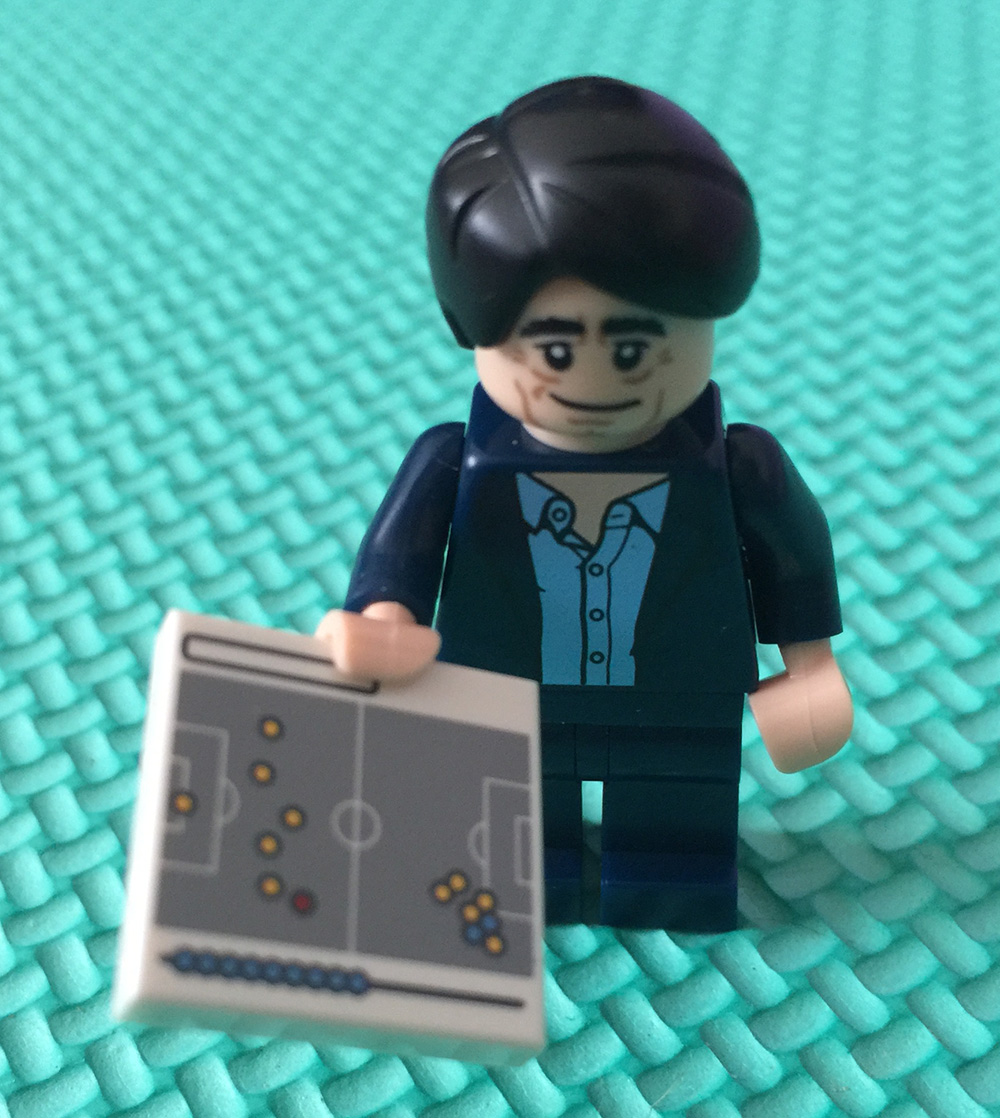 The white baseplate, which features for each of the figures has 4 printed stars - one for each World Cup won by Germany.

As is tradition with football kits, the goalkeeper of the team comes dressed differently from the rest of the team. His figure comes with six pieces - a hair piece, face, body, legs, a football and the white Minifigure baseplate.

The body shows off a black kit and long sleeves. The legs show a pair of white shorts.

REST OF THE TEAM

Which brings us on to the rest of the team, which we've grouped together because, well, they are the pretty much exactly same.

Each figure comes with six pieces - a hair piece, face, body, legs, a football and the white Minifigure baseplate. 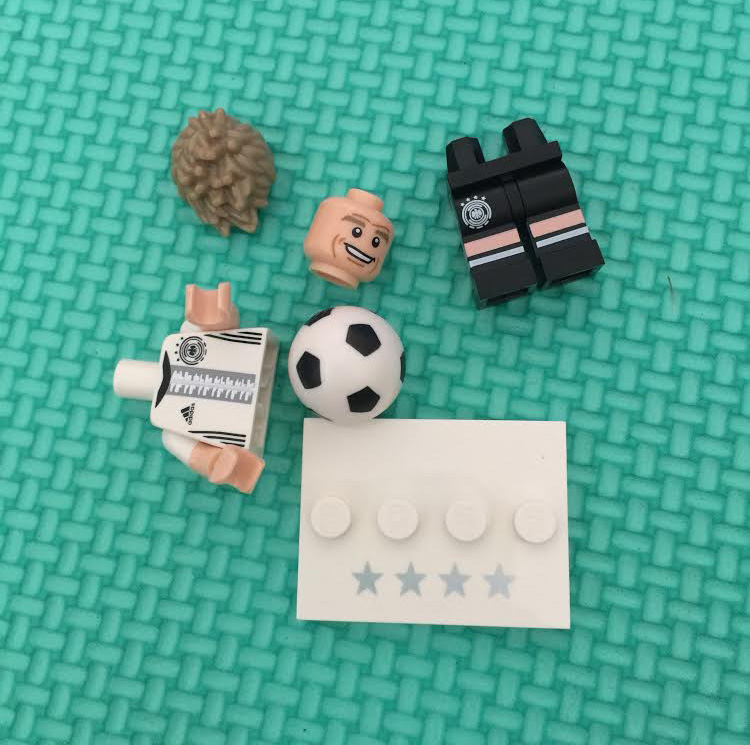 The moulds for the hair pieces of many of the players are identical to one another. Mats Hummels, Benedikt Höwedes and Thomas Müller share the same hair. As do Shkodran Mustafi, Bastian Schweinseiger and Marco Reus. And so do Mesut Özil, André Schürrle, Christoph Kramer, Mario Götze and Max Kruse. As the hair is the only unique shaped part of the figure it's going to be difficult to 'feel' through the bags to get the missing players you need.
Happily, the face prints for each figure are different and look reasonably like their real life counterparts.

The body prints show the DFB logo and Adidas logo and stripes on the front, with the player name and team number on the back. As per standard issue football kit the fronts are identical, and the backs are different per player. Which could lead collectors to a dillema about how to display their players on their walls. Each of the players are wearing short sleeves, so the arms and hands match the players body colour.

Bastian Schweinseiger's body piece also includes the word 'Spielführer' on his left arm indicating he is the captain.

The shorts for all the players are identical with their legs matching the players body colour.

And each player comes with a football meaning if you collect the entire set you will find yourself with 15 LEGO footballs(!).

It's a little bit disappointing that there is a lack of variation with each figure. Understandably football kits look the same but it could have been nice to show some of the players in their away kits; include different accessories like trophies or corner flags; or even include a referee in the set.

The quality of the LEGO Minifigures series continues in to this special themed set, but the appeal for these figures is only really going to apply to German national team football fans, some LEGO football fans and collectors of LEGO Minifigures. The hair pieces and facial expressions may also appeal to other fans.

It's a bit disappointing that there isn't some more variation with the players, either by varying the hair some more or by including different accessories, but it is understandable that a football team would look roughly the same.

The LEGO Minifigures: DFB – The Mannschaft figures are out in European LEGO stores now, and available in other stores in Germany, Austria and Switzerland.

In terms of future investment, the limited availability of the Minifigures is likely to cause this to be one of the highest value sets in years to come. A complete set of 16 figures is already starting to command higher prices on auction sites.

Most of the minifigures are the same pieces

The team look smart when displayed

If you somehow need a LEGO soccer team, this is it!