WhenWhen LEGO and Nintendo originally announced their Super Mario collaboration, many people’s minds went in to overdrive imagining what possibilities the partnership may produce.

Some imagined a series of Collectible Minifigures; some expected traditional Mario LEGO play sets and some wondered whether other Nintendo franchises would also be immortalised in LEGO. I don’t think anyone ever imagined that LEGO would go back to 1996 and create a set based on the Nintendo 64 game Super Mario 64.

What became clear early on with the partnership was that is was like no other, and the first sets involved the playable Mario character navigating LEGO levels using barcoded enemies and obstacles. If those play set appealed mainly to kids (and therefore disappointed a few adults) then this set should more than make up for it. Here is an 2,064 piece adult LEGO Mario set based on a 25 year old N64 game. And as someone who has only just recently managed to complete Super Mario 64 with all 120 stars, let’s just say I’m a little excited! 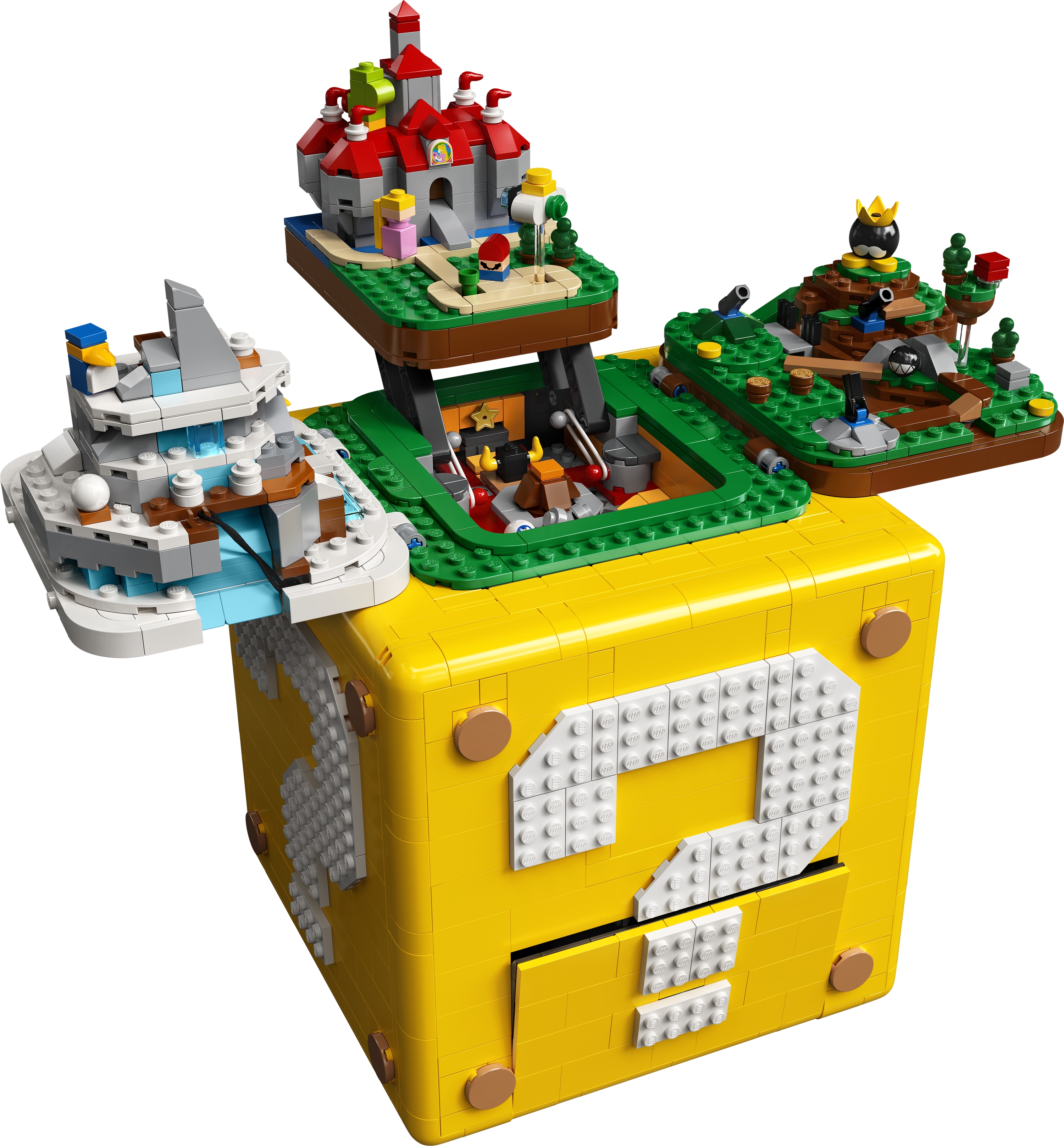 On to the build? Let’sa go!

Please note, this review contains hidden features and spoilers for the build not shown in marketing materials.

The Question Mark block is split in to 13 numbered bags.

The first 5 bags form the main structure and front and back of the question mark box and bag 5 also includes Bowser who will sit in a hidden compartment of the cube. Bags 6 - 12 for levels; before bag 13 with some additional work to complete the box.

The question mark box build is kept lightweight with windows and columns used to grow the size of the build. The trademark yellow is built with flat tiles on the exterior whilst the actual question mark is built from flat white studded pieces.

Lethal Lava Land contains a whole host of nods to the original level - there's the Bully bad guy sitting on a platform; Mr I (a giant eye) guarding a bridge; the red-hot log rolling pin obstacle; the Bowser sliding floor tiles and volcano (although this is built slightly later on). 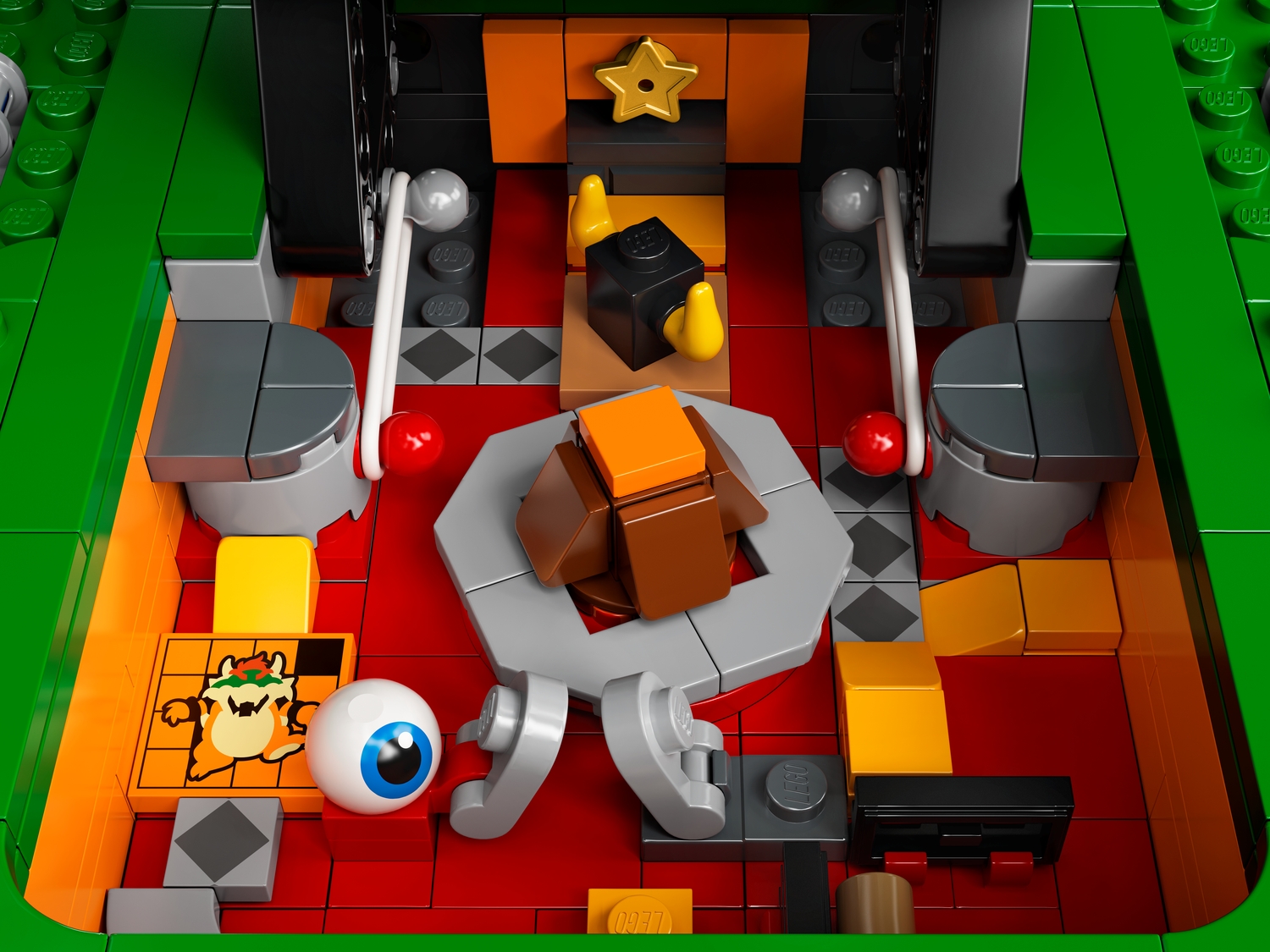 Next is Princess Peach's castle and grounds; which sits on top of Lethal Lava Land when resting in the build.

The front of the castle feels exactly like the start of Mario 64. There's the pipe 3D Mario makes his grand entrance from, the gardens where Mario hops, skips and jumps around; and Lakitu on the camera filming the action.

The castle interior has the iconic checkered floor tiles from the game together with LEGO 1x1 printed tiles to provide portals to the levels. The castle itself splits in to two to reveal the interior and there's the castle's circular floor tile which hides a barcode that can be scanned by the aforementioned interactive Mario figure (not included) providing an adventure with 10 stars hidden within the build for you to find. 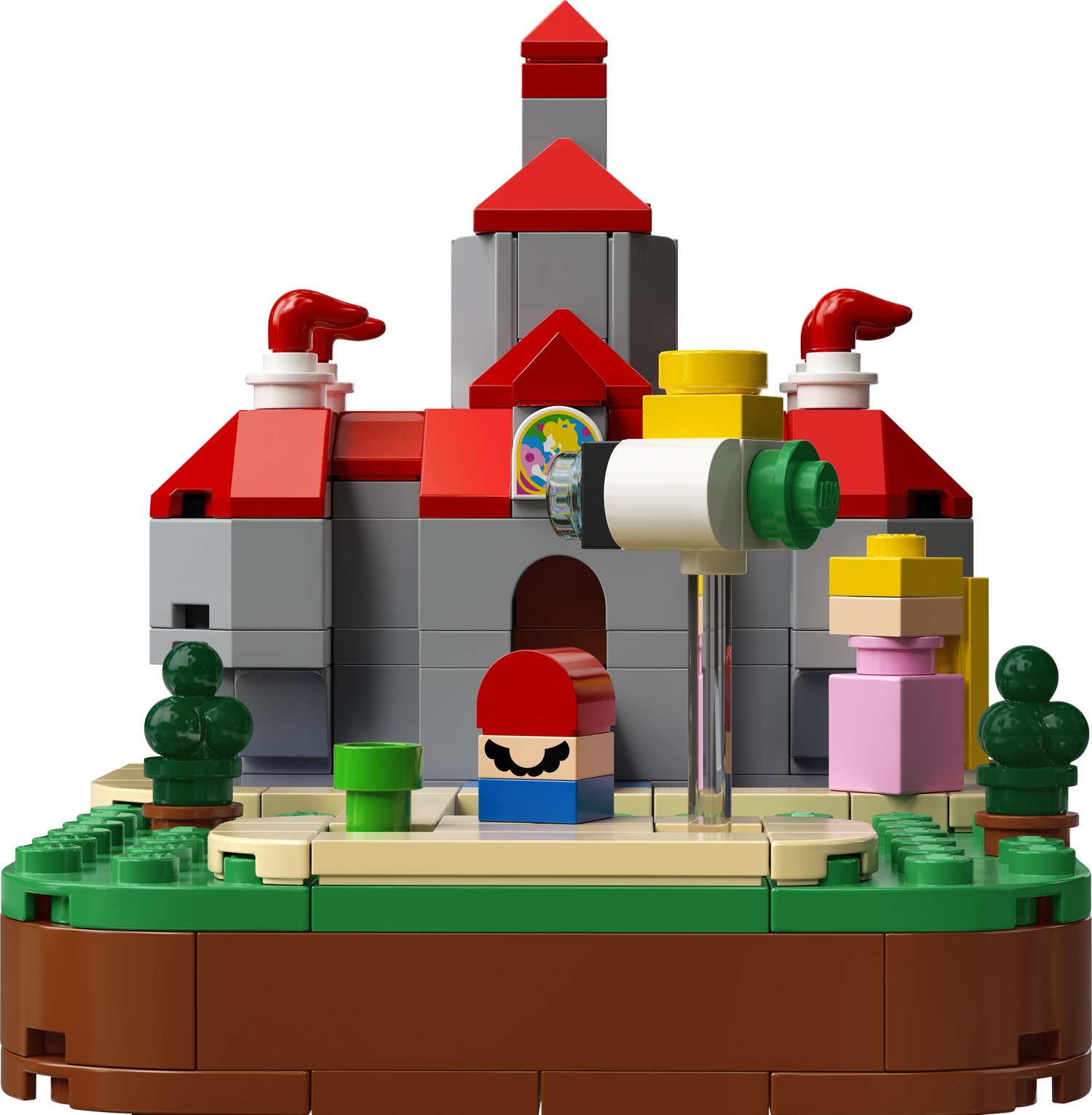 Bags 9 and 10 contain the Bob-Omb Battlefield - the first level in Super Mario 64 - and as you'd expected there's a lot more detail here too. From the chain chomp, to the island and cannons to King Bob-Omb himself; there's a whole heap of nostalgia here to be soaked in and it's the level people will probably be the most familiar with. 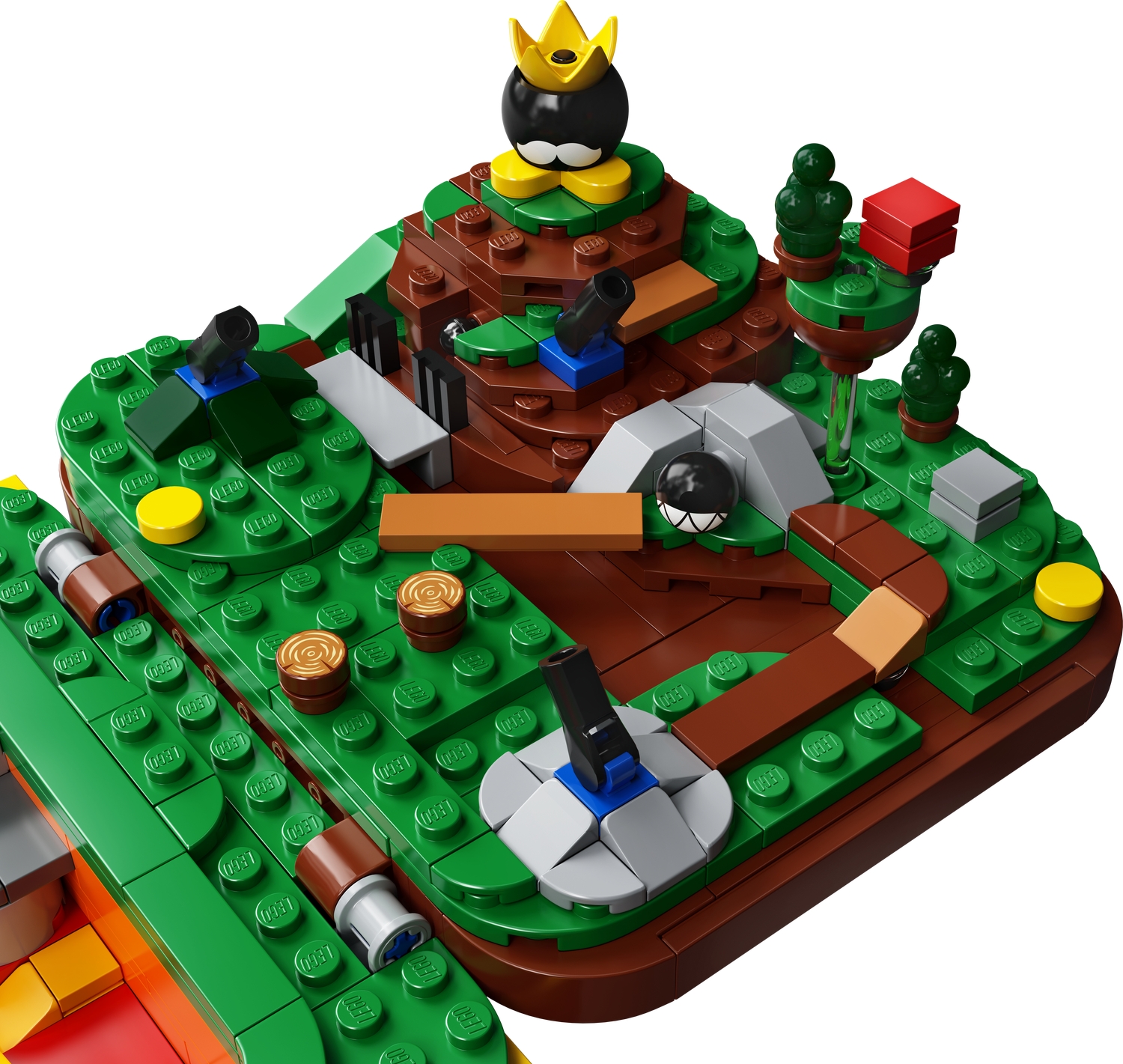 Cool, Cool Mountain is contained within bags 11 and 12, and again there's lots of detail like the chair lift, and the inner mountain ice slide. Penguins and the Snowman's head populate the outside of the mountain.

Overall, the Super Mario 64 ? Block is an excellent example of LEGO taking a risk at something new with a set that's primarily designed for Mario's older fans and based on a concept that works brilliantly.

There's a lot of interesting techniques used to build up the cube, and a number of lessons and tips to pick up on how to build at mini-scale. In all, the set will take around 7 hours to build. 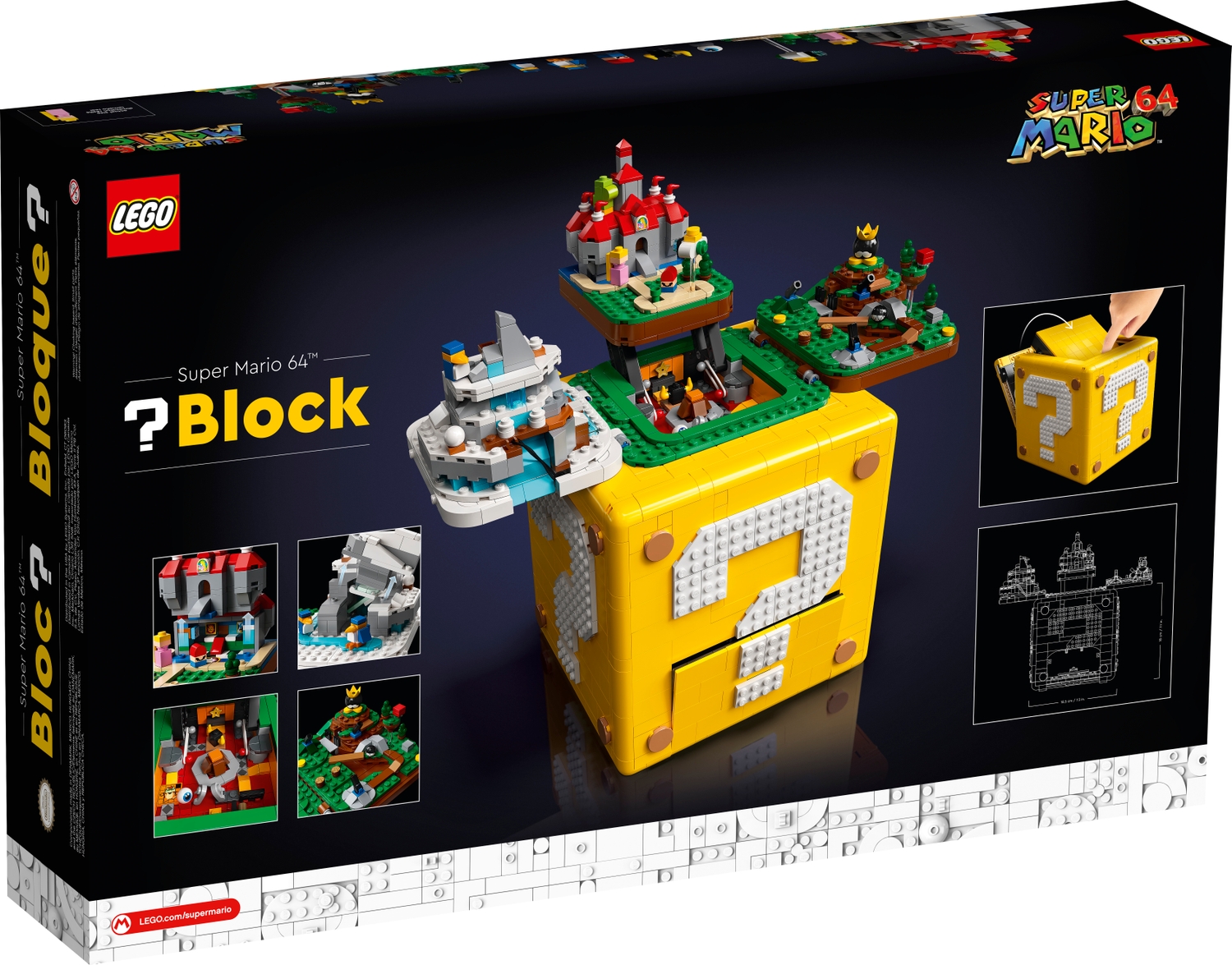 If you're looking for an unusual LEGO build; or you're a fan of Mario or the early 3D gaming age then this is the perfect set for you.

It looks cool closed, it looks great open. Sitting on your shelf, it invites interaction.

A little fiddly to play with the levels in the set, this is more for display but the Mario figurine play functionality adds to the interest in this area.

A satisfying build time and a great set to enjoy, at a good price